When a major LTE carrier in the southwestern United States had the opportunity to improve its 1900 network speed by increasing its bandwidth in two cities, it also faced a loss in coverage. The solution was to switch to CellMax high-gain antennas. Today, the carrier has installed or ordered approximately 5,000 CellMax antennas.

In 2016, a major U.S. wireless carrier expanded its PCS (1900) LTE bandwidth from 10 to 15 MHz in one city and from 10 to 20 MHz in another. The reason for these expansions was to improve the capacity on those carriers and to enhance the customer experience via throughput improvements.

Doubling the bandwidth of a carrier is usually accomplished by making software and hardware changes to the Remote Radio Heads at each sector. “It's kind of an easy button to improve the network speeds and customer experience,” explains Greg Paine, who is in charge of the account for CellMax. “But if the radio power stays the same, there is a 3 dB loss of coverage – a 50% power reduction – because the power is now shared across twice the bandwidth.”

This loss of 1900 MHz coverage meant that many users who, based on their position within the network, would have been served just fine by the 1900 network before the expansion, now had inadequate 1900 coverage and were redirected to the underlying 700 MHz network.

The additional load on 700 MHz network created capacity issues on that band. Primary Resource Block (PRB) and Physical Channel (PCH) utilization skyrocketed. “This was an issue particularly in the suburban and rural areas, where the site spacing was such that the hand-offs from site to site using the 1900 network were limited to begin with,” Greg explains. “So now, with the 3 dB loss of 1900 coverage, there were areas where only 700 MHz coverage existed to serve the users there.”

This gave carrier a limited number of options. Theoretically, it could add sites. “But that wasn’t very realistic,” Greg says. “Building new sites would have been very expensive and would have been a very long-term project.”

It could also increase radio power, but that would only affect download coverage. Since the bandwidth of the uplink also doubled, the coverage of the UE was also reduced by 3dB.

Another possibility would have been to improve the efficiency of the 700 network. “This requires a Link Budget enhancement (UL and DL) which can only be done via reduced loss in the radio link or reduced interference,” Greg says. “This is difficult to do, especially on the uplink, but CellMax antennas can help with this.”

Faced with those options, the carrier decided to restore the 1900 coverage for both uplink and downlink that it had lost with the bandwidth expansion. To do that, it selected CellMax Dual-Band Hexport antennas (primarily 110365 with some 110375).

“The additional 3 dB of mid-band gain we provided to them over their existing antennas allowed them to move subscribers that had been supported by the 1900 MHz band before the expansion back to the 1900 MHz band. This offloaded congestion from the 700 MHz band.” 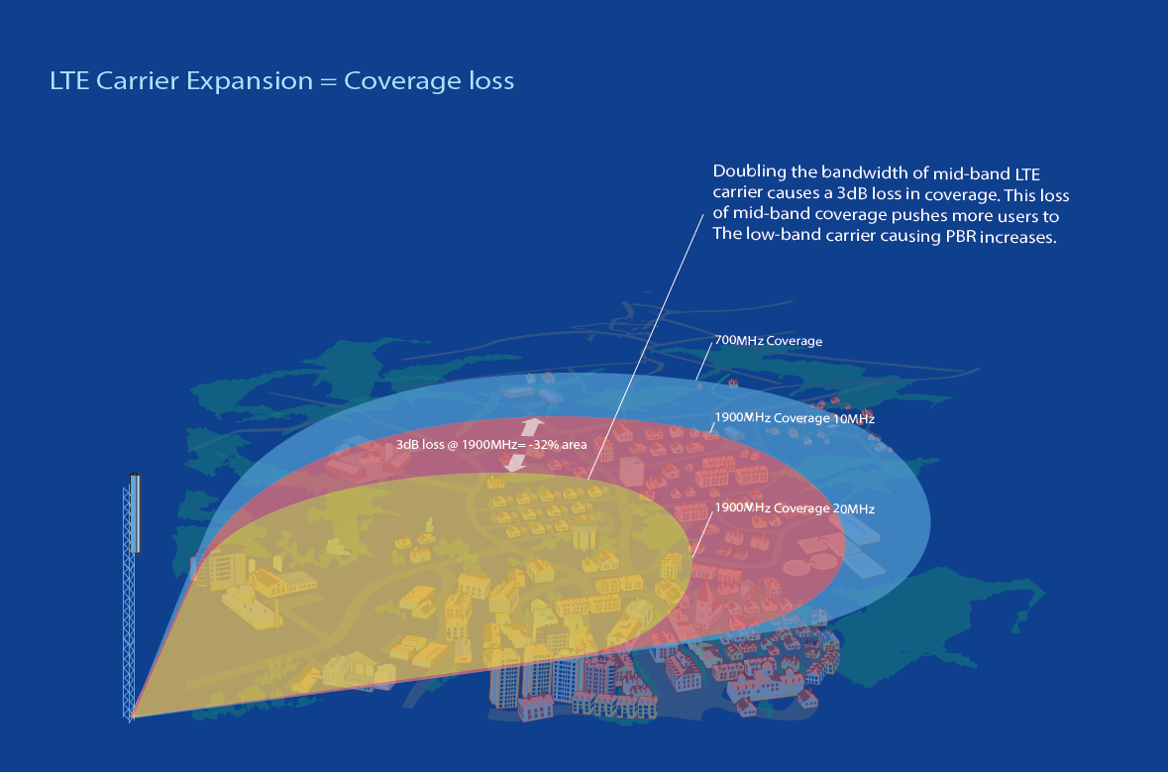 Faced with lower coverage after increasing bandwidth, the carrier decided to restore coverage for both uplink and downlink with CellMax Dual-Band Hexport antennas (primarily 110365 with some 110375).

Improvement in both bands

“Our Dual-Band Hexport antennas also provided a 1 dB improvement in the 700 MHz band, further improving the efficiency of that band. This was a relatively inexpensive and elegant solution as just an antenna swap was required.”

Greg points out that the company also chose to perform both radio and SW upgrades when they swapped to CellMax antennas. This makes it difficult to for the carrier to provide KPI improvements tied to CellMax product alone.

“However, while we have never received KPI data from this project, the feedback we have received has been that the antennas are performing as advertised – that is, exceptionally,” Greg says. “And the client is extremely happy with the antennas, as the project is now into its third year and they have ordered more than 5,000 antennas.”