Our antennas increase range and capacity by minimizing interference, improving load-balancing and eliminating PIM, allowing carriers to get the most value from their investment in network and spectrum.

CellMax high-gain antennas increase base station range and usable network capacity by minimizing interference, improving load-balancing and eliminating PIM, allowing carriers to get the most value from their investment in network and spectrum. They improve such KPIs as drop call rate, call set-up success rate, data throughput, total traffic and more.

Increased antenna efficiency – and hence, higher gain – enables significant improvement in urban, rural, and cell-edge coverage. In an urban environment, the cell edge is often located indoors and in the center of a cell’s geographical coverage area. For rural sites, it can be at the cell’s maximum range. The improved efficiency has an impact on both uplink and downlink.

CellMax High-Efficiency antennas are based on a unique, patented technology that allows for 2dB-3dB (56%-100%) higher gain compared to antennas based on traditional technology. This offers up to a +44% geographical coverage increase and is equivalent to 30% more sites using traditional antennas.

Making the most out of existing sites greatly reduces the need for new site acquisition and all the tedious work and expenses related to this work.

In rural areas, the high efficiency of CellMax antennas allows mobile operators areas to maximize high-band coverage, reaching indoors in outlying villages, as well as to migrate traffic away from the congested low band (see load balancing below) to the high-band capacity layer. It also results in increased coverage equivalent to a grid with 30% more sites.

Up to 500% stronger indoor signal

But CellMax high-gain antennas also broadcast a clean signal farther than others, increasing capacity (see below) and reducing the need to fill coverage holes with infill sites. That lowers costs for site acquisition (CAPEX) and operational cost (OPEX). Such sites are often necessary when adding higher frequencies that have lower range. 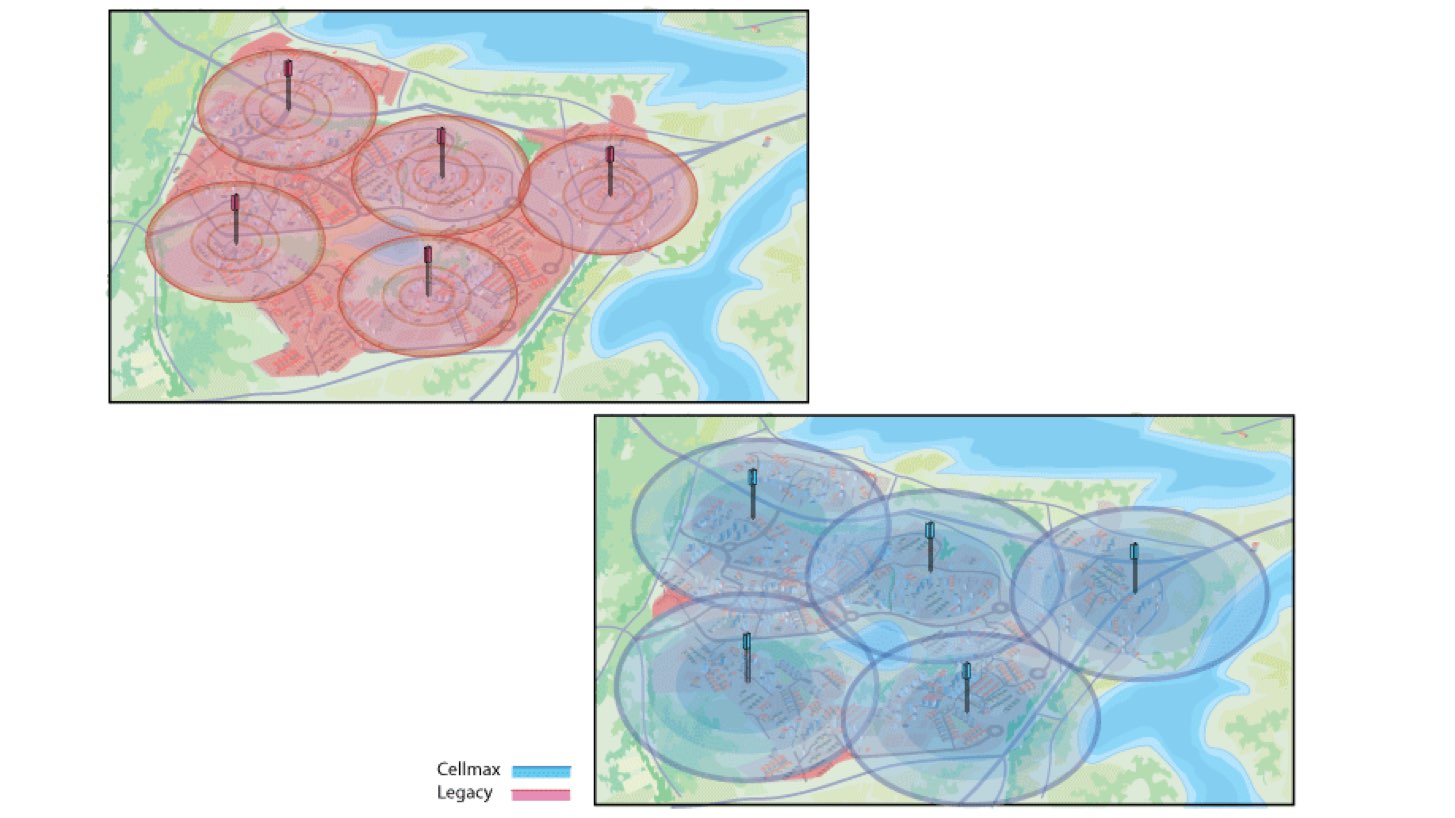 CellMax high-efficiency antennas are based on a unique, patented technology that allows for 2dB-3dB (56%-100%) higher gain than similar antennas based on traditional technology. This reduces the number of sites needed in greenfield networks and the number of infill sites needed to fill coverage holes in existing networks.

At higher frequencies, there is much more available capacity. But the range is not as great as for lower frequencies. Cellmax high-efficiency antennas improve high band coverage, so more subscribers can use the high band, releasing low band to the subscribers that really need it.

The longer range of low band means it often becomes congested. Although the high frequency bands above 1700 MHz hold much more spectrum than the low bands below 1000 MHz, the challenge with high band is to reach farther and share the capacity with more subscribers. The best way to address this is not to improve the low band but to extend the range of the much higher capacity high band and migrate users/traffic to it.

Tests with carriers show that changing the high-band antenna to a CellMax antenna enables a shift of 20% or more of traffic from the low band to the high band, so carriers can utilize the full potential of the high band and the massive capacity available there.

CellMax antennas increase network capacity by an average of 30% or more by improving spectrum efficiency. This maximizes the value of network and spectrum. The increased range of the high band with CellMax antennas also enables more subscribers in more areas to see and utilize the vast capacity available on the high band. This in turn, allows carriers to add subscribers and/or increase speed. It also reduces the need for new spectrum acquisition. Today, investment in new spectrum can run into the billions of euros or dollars.

The antenna improves spectrum efficiency by improving the quality of the network. This enables higher modulation coding schemes, with fewer redundant bits needed to ensure adequate reception. The result is more bits/second/Hertz.

In modern radio systems, it becomes increasingly important to contain the signal within the cell, since the neighboring cells on the network are using the same frequency. Further, it’s important to note that most of the interference comes from the antenna´s main lobe, not the upper side lobes.

This is true for two reasons. First, the gain is much higher in the main lobe than in upper side lobes. Second, the coupling loss to the interfering area is much smaller, since the distance is shorter.

Since the Cellmax antenna’s main lobe shape requires less tilt, it can be directed towards the cell border, increasing signal strength towards users on the cell edge while, minimizing signal leakage to adjacent cells. With a sharp roll-off of the main lobe, CellMax antennas create a well-defined coverage area, with a strong signal within the cell but at the same time minimizing the signal leaked into the neighboring cell. This increases the network quality (i.e., CINR).

Therefore, more information bits can be transmitted in the same amount of spectrum (i.e., higher modulation coding schemes are used), resulting in 30% or more spectrum capacity (b/s/Hz), in the system. 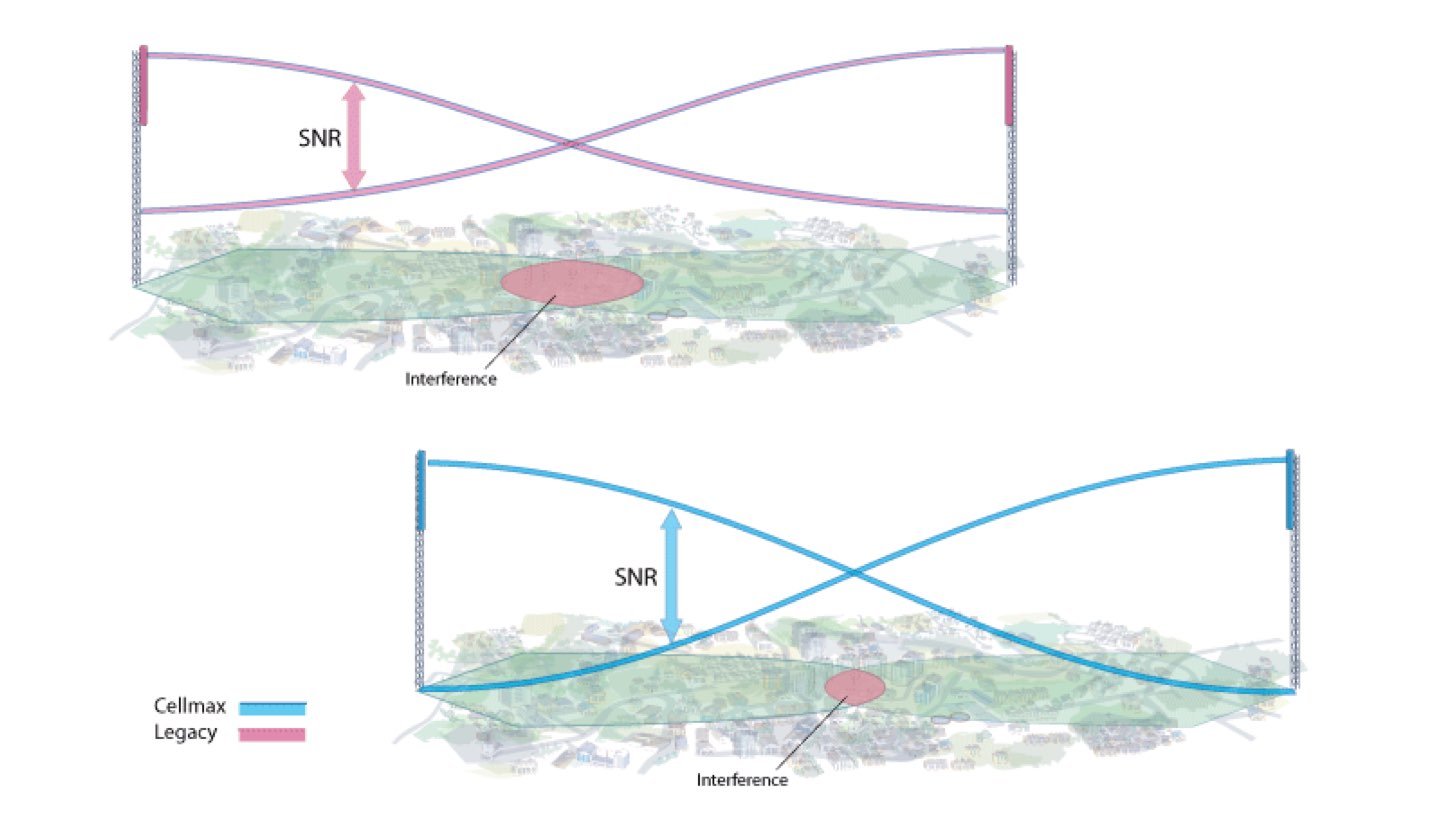 In modern radio systems, it becomes increasingly important to contain the signal within the cell. Since the Cellmax antenna’s main lobe shape requires less tilt, it can be directed towards the cell border, increasing signal strength towards users on the cell edge, while decreasing the area of interference. This increases network quality so that higher modulation coding schemes can be used and more information bits can be transmitted in the same amount of spectrum. The result is 30% or more spectrum capacity (b/s/Hz), in the system.

Perceived user capacity depends on how much spectrum a subscriber can use. This is, of course, very determined by the coverage. By enabling the user to access more spectrum, the capacity for the user is increased (load balancing). As carriers invest in expensive high-band spectrum, they need to make it reach as far as possible. 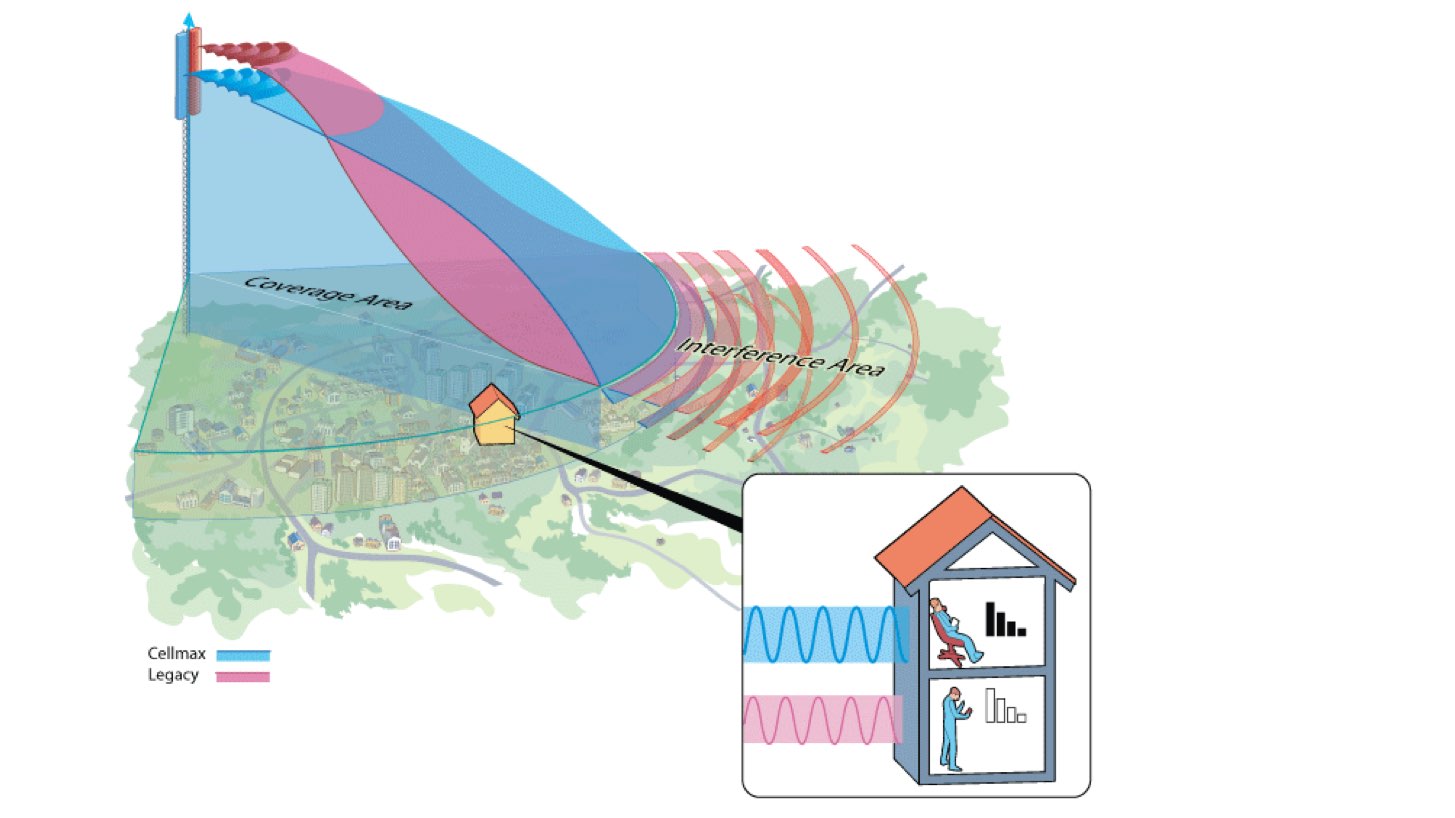 In the illustration above, the legacy antenna (red) creates a larger interference area that extends farther from the edge of the cell (best server coverage area), compared to the CellMax antenna (blue). This means you can place a larger amount of energy (the C in CINR), closer to the cell edge. This enhances indoor penetration, without leaking signal into the neighboring cell. Higher signal (C) and lower interference (I) I means better network quality (higher CINR) and improved end-user experience.

Passive Intermodulation (PIM) is the generation of interfering signals caused by non-linearities in the mechanical components. Prime causes include junctions between dissimilar materials, cables, and connectors. Other causes include rust, loose connections, and oxidation.

The interfering signals raise the noise floor and reduce receiver sensitivity. This has negative impact on dropped call rate, system capacity, data rates, and mobile devices’ battery life. Finding PIM and replacing antennas is also a cost. And often, PIM can be stealing capacity for a long time before operators realize PIM has become a problem.

This type of interference is not a factor in Cellmax antennas, due to their unique, patented design. All critical PIM sources such as soldering, cables, dissimilar material contacts are completely removed through the use of an aluminum profile, aluminum rods and capacitive coupling. The result is virtually PIM-free antenna (Less than -160 dBc is typical).

Furthermore, the high quality of the antenna and the precision of the manufacturing process increase the longevity of the components, offering mobile operators higher and more consistent performance in any environment and timeframe compared to competitors.

Check out our latest news